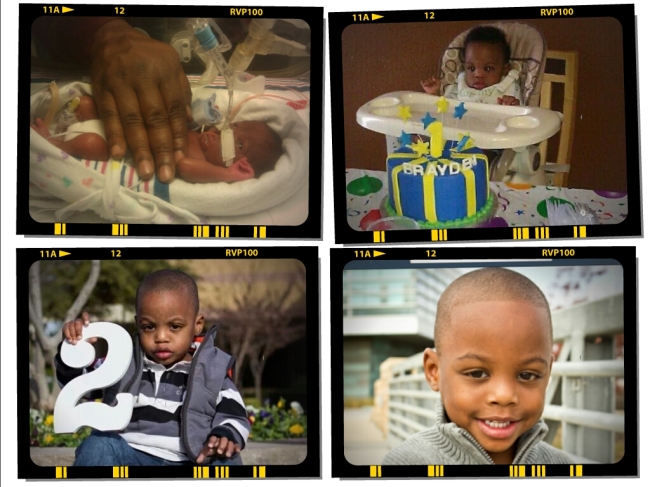 BJ’s birthday came on a super cold Saturday. We had to reschedule his birthday party; I bought cupcakes on that Thursday because I knew we’d be iced in for the weekend. The Hubter and I sang him happy birthday and he ate two cupcakes while enjoying the all too infrequent family time with just us three. Minus the last minute rescheduling of BJ’s party, this was one of the best birthdays we’ve enjoyed with him so far. Just love, laughter, hugs, playing and lots of cupcakes. I made it through this year with no tears.

With BJ getting older I’m starting to see glimpses of him sans baby. The chubs in his cheeks are starting to lean out and he’s talking and asking questions like such a big boy. He’s got a stubborn streak that’s out of this world and he’s quick to laugh. I think about him getting older and it makes me sad. He’s still got his innocence. He’s still convinced that “daddy beats up the monsters” and thinks my kisses make any ouchie better. He’s a footie pajama wearing, song singing, boxing and basketball playing angel and he’s such an incredible blessing.

There are so many things I desire for him. When I think about his future I know that he’ll become more and more independent and he’ll have hurts that I can’t kiss and make better. I’ve thought a lot about how we as parents can sometimes rush things. When they’re crawling we want them to walk, when they’re walking we want them to talk, as soon as they’re talking we want them potty trained… we tend to scoot them through life. From one thing to the next not fully taking the time to relax and enjoy where they’re at. I was talking to one of BJ’s teachers about potty training and BJ’s lack of desire for it and she told me “don’t worry about it, he won’t be 5 years old in diapers, he’ll get it when he’s ready” and with that sentence I had a minor epiphany. BJ is growing and learning at his own pace. I spent the first three years of his life worry about developmental delays and trying to make sure that we made it “past” the NICU. I’ve been obsessed with learning and development toys, if he watches TV it must be educational I quiz him about his colors and his letters and stress myself to death because I’m worried that he’ll be behind when he starts school. My biggest fear has been that he won’t be where the other kids are… but what I failed to realize was that no matter where he is he’ll be where he is SUPPOSED to be.

My big boy is growing and developing into who he’s going to be, I can steer the ship as much as I’d like to but even at 3 he’s ultimately the one who will decide what path he’s going to go on. It’s my job to support and encourage him no matter what.

I realized on his birthday that in some ways I’ve got to relax. We’ve come a long way from the NICU, I’ll never get over our rough start but I can’t let it keep me from seeing the beauty that is being a mom. I can’t hold so tightly to his past that I can’t embrace his future. My biggest wish for BJ on his 3rd birthday and in life is that he LIVES. I pray that my little miracle boy doesn’t just exist in life I pray that he embraces each new day and challenge with the same unrelenting determination that he’s had since the day he was born, the determination and fight that kept him with us during those uncertain days. My wish for my sweet boy is that he lives his life to the fullest… that he never let fear drive his ship. And I will work to lead that concept by example. As we step into my big boys third year we will leave behind the fear and anxiety that I’ve had. I will mother my son with a new vivaciousness, I will continue to wear our journey as a badge of honor and courage but I will leave the apprehension behind me. My transformation may take some time but I’ll get there… when something traumatic happens in your life you can’t just decide to get over it. It takes time it changes you, it changes your perspective and your outlook on life. I won’t get over it, but I will get past it and use our rough start to help others. And BJ will see that you can turn rough things into good ones. He’ll learn resiliency and in the process the both of us will LIVE.